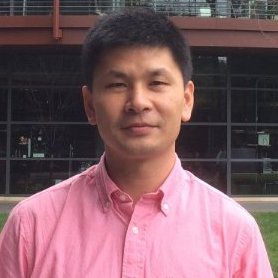 Brad: Can you talk a bit about your current research?

Wei: Matrix factorization (MF) is at the core of many popular algorithms, such as collaborative-filtering-based recommendation, word embedding, and topic modeling. Matrix factorization factors a sparse ratings matrix  (m-by-n, with  non-zero ratings) into a m-by-f matrix (X) and a f-by-n matrix (ΘT), as Figure 1 shows.

Suppose we obtained m users’ ratings on  items (say, movies). If user u rated item v, we use

as the non-zero element of R at position (u, v). We want to minimize the following cost function J.  To avoid overfitting, we use weighted-λ-regularization proposed in [1], where

denote the number of total ratings on user u and item v, respectively.

Many optimization methods, including Alternating Least Squares (ALS) and Stochastic Gradient Descent (SGD) [1] have been applied to minimize

. We adopt the ALS approach, which first optimizes X while fixing

while fixing X. That is, in one iteration we need to solve these two equations alternatively:

B: What are some of the biggest challenges in this project?

W: Recently, the GPU has emerged as an accelerator for parallel algorithms. It has massive computing power (typically 10x higher floating-point operations per second (FLOP/s) versus a CPU) and memory bandwidth (typically 5x versus a CPU), but with limited amount of control logic and memory capacity. Particularly, the GPU’s success in deep learning inspired us to try GPUs for MF. In deep learning, the computation is mainly dense matrix multiplication which is compute bound. As a result, a GPU can train deep neural networks 10x as fast as a CPU by saturating its FLOP/s. However, unlike deep learning, a MF problem involves sparse matrix manipulation which is usually memory bound. Given this, we want to explore a MF algorithm and a system that can still leverage the GPU’s compute and memory capability.

Given the widespread use of MF, a scalable and speedy implementation is very important. There are two challenges:

B: What NVIDIA technologies are you using to overcome the challenges?

(1) On a single GPU, we optimize memory access in ALS by various techniques including reducing discontiguous memory access, retaining hotspot variables in faster memory, and aggressively using registers. These techniques allow cuMF to get closer to the roofline performance of a single GPU. See Figure 2.

Model parallelism. As seen from equation 1, the solution of each

is independent so model parallelism is straightforward.

Data parallelism. To tackle large-scale problems, on top of the existing model parallelism, we design a data-parallel approach. When  is big and cannot stay in one GPU, we re-write the summation matrix in eq. 1 to its data-parallel form as:

That is, instead of transferring all

s to one GPU to calculate the sum, it calculates a local  sum on each GPU with only the local

s, and reduces (aggregates) many local

The experimental results demonstrate that with up to four Titan X GPUs on one machine, cuMF is (1) competitive compared with multi-core methods, on medium-sized problems; (2) much faster than vanilla GPU implementations without memory optimization; (3) 6 to 10 times as fast, and 33 to 100 times as cost-efficient as distributed CPU systems, on large-scale problems; (4) more significantly, able to solve the largest matrix factorization problem ever reported.

CuMF can be used standalone, or to accelerate the ALS implementation in Spark MLlib. We modified Spark’s ml/recommendation/als.scala (code) to detect GPUs and offload the ALS forming and solving to GPUs, while retain shuffling on Spark RDDs.

This approach has several advantages. First, existing Spark applications relying on mllib/ALS need no change. Second, we leverage the best of Spark (to scale-out to multiple nodes) and GPUs (to scale-up in one node).

B: What is the impact of your research to the larger data science community?

W: First, by using cuMF for matrix factorization, a large category of workloads that derive latent features from observations can be accelerated. These workloads include recommendation, topic modeling and word embedding.

Second, cuMF sheds light on accelerating machine learning algorithms involving sparse and graph data. We are glad to see that NVIDIA is also moving toward this direction by releasing nvGRAPH in the forthcoming CUDA 8.

B: When and why did you start looking at using NVIDIA GPUs?

What is your GPU Computing experience and how have GPUs impacted your research?

It was a very smooth experience learning and using CUDA. I learned a lot from the two online parallel programming courses that both use CUDA — Intro to Parallel Programming and Heterogeneous Parallel Programming. There are a few excellent books that I can refer to, including Programming Massively Parallel Processors: A Hands-on Approach, by David Kirk and Wen-mei Hwu. In addition, I always get useful information and answers from the NVIDIA Forums.

GPUs have helped cuMF to be the state-of-the-art MF solution in terms of speed. Our research result is to be published in HPDC [2], a premier high performance computing conference.

B: What’s next for cuMF?

W: We have open-sourced cuMF. In future work we plan to make cuMF more user-friendly by providing a Python interface. We also want to further enhance it by using the latest hardware and software features such as NVLink, FP16 and NCCL.

B: In terms of technology advances, what are you looking forward to in the next five years?

W: In my personal opinion, in the next five years HPC technology is going to impact many aspects of machine learning. HPC has enabled and will keep enabling much more sophisticated machine learning, dealing with even bigger data, in data center and on devices.

You can read the HPDC paper describing cuMF linked in reference [2], below, or watch the GTC 2016 talk. If you’d like to try out cuMF, check out the source code on Github.

Deep Learning for Image Understanding in Planetary Science
By Brad Nemire | May 12, 2015