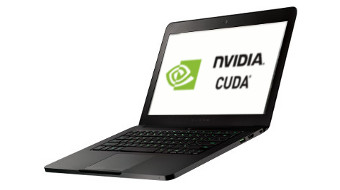 There’s a new post over on the NVIDIA Corporate Blog by my colleague Mark Ebersole about the latest line of laptops powered by new GeForce 700-series GPUs. As Mark explains, the GeForce 700 series (GT 730M, GT 735M, and GT 740M), powered by the low-power GK208 GPU has the latest compute features of the Tesla K20 (powered by the GK110 GPU), including:

The availability of the latest GPU architecture on low-cost, highly portable laptops makes it possible to develop CUDA code that uses the latest performance features for deployment on high-end Tesla GPUs. Check out Mark’s blog post for more information.

About Mark Harris
Mark is a Principal System Software Engineer working on RAPIDS. Mark has twenty years of experience developing software for GPUs, ranging from graphics and games, to physically-based simulation, to parallel algorithms and high-performance computing. While a Ph.D. student at The University of North Carolina he recognized a nascent trend and coined a name for it: GPGPU (General-Purpose computing on Graphics Processing Units), and started GPGPU.org to provide a forum for those working in the field to share and discuss their work.
Follow @harrism on Twitter
View all posts by Mark Harris
Related posts
CUDA 9 Features Revealed: Volta, Cooperative Groups and More
By Mark Harris | May 11, 2017

Maxwell: The Most Advanced CUDA GPU Ever Made
By Mark Harris | September 18, 2014

5 Things You Should Know About the New Maxwell GPU Architecture
By Mark Harris | February 21, 2014